There is much to be said for this combination of supplements. 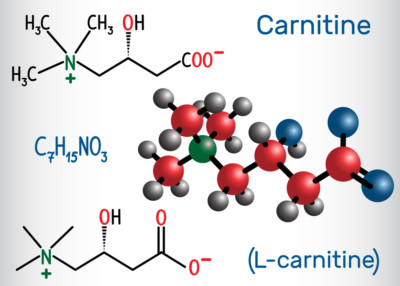 Below is an explanation of each of these substances and how they may affect the nerves of the body.

This is an amino acid (a building block for proteins) that is naturally produced in the body. It helps the body produce energy at the cellular level.

Your body makes carnitine in the liver and kidneys and stores it in the skeletal muscles, heart, and brain.

One of the main roles of acetyl L-carnitine is to carry fatty acids from the cytosol (the main body of the cell) into the mitochondria (the energy-producing furnaces within cells) so that these fats can be burned for energy.

The cell, no matter what type of cell, is working better.

“A collaborative study between the Mayo Clinic and a medical center in Russia found that Acetyl l Carnitine is a powerful antioxidant that provides significant nutritional support for normal nerve conduction and healthy nerve function, in addition to normalized sensation from burning and
prickling pain. The findings were published in the professional journal, Diabetes Care. “We were surprised by the magnitude of the change and the rapidity of the response to Acetyl l Carnitine. It is very safe and there have been no known complications,” says Dr. Peter Dyke, Mayo Clinic
Neurologist and peripheral nerve specialist.”  DaniDaily – Nerve Health

Acetyl L-Carnitine is a type of carnitine which is a substance that helps the body turn fat into energy.

Evidence indicates that taking acetyl L-carnitine and R-alpha lipoic acid together resulted in even greater results than either ingredient alone.*

*Studies Acetyl-L-carnitine in the treatment of peripheral neuropathic pain: a systematic review and meta-analysis of randomized controlled trials.

Alpha-lipoic acid is an antioxidant that is made by the body and is found in every cell, where it helps turn glucose into energy.

More energy production in the cells is created with acetyl l-carnitine but this creates more free-radicals. Adding Alpha Lipoic Acid to the Acetyl L-Carnitine handles these free radicals.

Free-radicals cause harmful chemical reactions that can damage cells in the body. Antioxidants can get rid of free-radicals and may reduce or help prevent some of the damage they cause.

Other antioxidants work only in water (such as vitamin C) or fatty tissues (such as vitamin E), but alpha-lipoic acid is both fat- and water-soluble. That means it can work throughout the body.

Antioxidants in the body are used up as they attack free-radicals, but evidence suggests alpha-lipoic acid may help regenerate these other antioxidants and make them active again.

Studies showed that taking acetyl L-carnitine and R-alpha lipoic acid together resulted in even greater improvements than either ingredient alone.

With these two supplements, the cell is producing better.
There are many uses for this combination.

Since acetyl-L-carnitine helps the body produce energy. It is important for heart and brain function, muscle movement, and many other body processes. *

It has been known for some time that this combination improves memory.

Acetyl L-Carnitine has been extensively studied and found to have significant cognitive effects as well as it having anti-aging effects. Several clinical trials suggest that acetyl L-carnitine improves overall mental functioning and mood.

Together they help the brain to utilize glucose needed to function optimally.

Damage to the nerves of the body is a growing problem. R-Alpha lipoic acid and acetyl L-carnitine are key to addressing this problem.

Evidence also indicates that alpha lipoic acid has an ability to kill free-radicals which may help support healthy nerves.

Studies show that alpha lipoic acid has an ability to kill free-radicals which may help people who have pain, burning, itching, tingling, and numbness in the arms and legs from the nerve damage.

Studies show that taking acetyl L-carnitine and R-alpha lipoic acid together resulted in even greater improvements than either ingredient alone.

MORE SOON WITH THE ABOVE AMINO ACIDS