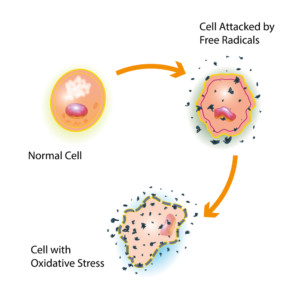 We’ve all heard of free radicals and that they are bad, and that getting enough antioxidants is good, but what are they? Why do we need antioxidants?

First let’s look at free radicals and how they come into being.

Metabolism is defined as the chemical reactions inside your cells that combine foods and oxygen to create energy. Energy is required for every body function from breathing to cell division to the beating of our hearts. Without energy, our bodies would simply stop working.

When you drive your car, you burn gasoline by combining it with oxygen in the pistons of the engine. Your car moves due to the released energy, but it also gives off exhaust fumes as a byproduct. Something very similar happens in the cells of your body. When oxygen combines with glucose (made from food) in your cells you make energy, but you also make “free radicals” your body’s version of exhaust fumes. Free radicals are unstable, destructive oxygen atoms. They are missing electrons. These radicals injure you body’s healthy molecules by stealing electrons to replace their missing electrons and to balance themselves. In the process, the free radicals injure cells and leave damaged cells and tissues in their wake. This process is called oxidation and it’s what makes iron rust and fruit turn brown.

In excess these free radicals can cause tissue and organ damage, they can combine with innocuous cholesterol into sticky plaque that clogs arteries, they can destroy cell membranes, the protective covering of cells. They can get into the DNA and inflict damage and thus impair the body’s cell’s ability to divide and repair itself. This can lead to a breakdown of the bodily systems.

Human beings and animals have developed mechanisms that can protect against the formation of these dangerous byproducts of metabolism. The body produces antioxidants. When an antioxidant finds a free radical, it grabs hold of it, and escorts it out of the body before it can do any damage. Chemically it helps to neutralize the free radical by offering their own electrons and so protect healthy tissue.

Antioxidants are found in the food we eat. However, foods lose their antioxidant powers when they are processed and cooked.

The best bet is to keep your antioxidant level high by eating foods high in the vitamins needed to create antioxidants.

Where can you get Antioxidants?

Foods: Organic fruits and vegetables. It is difficult to get enough of these from these sources to hold back the free radicals constantly being generated in our polluted environment, processed foods, smoking, etc.

The Most Powerful Natural Antioxidant You May Never Have Heard Of

The most powerful natural antioxidant discovered to date is Hydroxytyrosol.

Hydroxytyrosol has an ORAC value (Oxygen Radical Absorbance Capacity – its ability to absorb cell damaging free radicals) of 68,576 – which is considered to be 15 times higher than green tea and 3 times greater than CoQ10. It is recognized by scientists, because of numerous, well documented studies, for its powerful anti-inflammatory and antioxidant effectiveness.

Hydroxytyrosol has the highest level of free radical absorption ever reported for a natural antioxidant. It has some very special characteristics that contribute to its effectiveness. It is:

* The only phenol (organic compound) that is able to cross the blood-brain barrier, which allows it to absorb free radicals throughout the central nervous system

* Both fat and water soluble, giving it the highest bioavailability of any antioxidant.

The Science Behind Hydroxytyrosol

In numerous human, animal and in vitro (test tube) studies, Hydroxytyrosol has been shown to:

* Have a therapeutic effect on the heart and cardiovascular system.

Inflammation Relief is totally natural and derived from the juice of fresh organic olives (Olea europaea). Each capsule of Inflammation Relief delivers a high concentration of polyphenols (Hydroxytyrosol) and oleic acid and sets a new standard for a true bioavailable anti-inflammatory natural formula.

In addition, the olive polyphenols in Inflammation Relief deliver one of the highest levels of free radical scavenging activity against the damaging effects of free radicals on cells and body tissues. One capsule contains as much antioxidant polyphenols as 8 to 12 ounces of extra virgin olive oil but without the calories.

Inflammation Relief is a proprietary formula exclusive to Qgenics. At the core of this exclusive formulation is Cellinfusion™ Technology which provides 3.4 times greater absorption giving maximum bioavailability and potency of the olive phenol extract at the cellular level to achieve results.

The Simple Truth About Oxidation