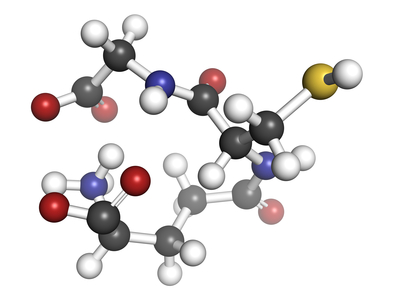 Why is glutathione important?

All cells in the body need glutathione. It has been said that the levels of glutathione in our cells will determine how long we will live.Do I have your attention?

In order to function well, all the cells in the body need water, oxygen, glucose and glutathione. The cells produce energy and makes new cells as they wear out. If the body is making new healthy cells it is delaying the aging process, if it is making unhealthy cells it is aging the body. It is noted that people who live to 100 years of age, will have glutathione levels similar to 30-50 year olds.

Glutathione is produced naturally in the body as long as it is given the right nutrients to do this. Glutathione is the body’s master anti-oxidant.

Perhaps glutathione is the fountain of youth.

What is glutathione made of?

It is a small protein that is made in every cell of the body. It must be made by the three amino acids, cysteine, glycine and glutamate.

Every cell needs and makes glutathione.

The largest amount of glutathione in our bodies is found in the liver, lining of the lungs, kidney, heart and brain.

Since glutathione is the master anti-oxidant, it defends the body against toxins, viruses, polluted atmosphere, radiation from the environment and anything that creates free radicals.

Glutathione is needed by the liver. Without it, the liver would be overwhelmed with all the toxins that attack the body. The liver depends on glutathione to help to detox the body.

What can reduce our levels of glutathione?

Levels of glutathione can be reduced by stress, exercise, infection, injury, emotional upsets and environmental toxins. In other words, those things that create stress in the body deplete the glutathione in your body.

Some other things have also been shown to deplete glutathione – acetaminophen (Tylenol, Panadol, Tylenol Arthritis Pain, Aspirin Free Anacin, and any cold medicine containing acetaminophen) and/or codeine. Alcohol depletes the liver of glutathione. Cigarette smoke and any drugs that must be neutralized by the liver will deplete the body of glutathione. A lot of drugs will also deplete the levels in the kidneys, heart and other tissues.
X-rays and ultraviolet rays from sunlight, illegal drugs (such as marijuana) as well as bacterial or viral infections including HIV are also culprits.

Toxins (halocarbons) used in plastics, dry cleaning solvents; pesticides, herbicides, and refrigerants all affect the liver by making it over active and thus depleting the glutathione.

What are the benefits that someone can feel?

Glutathione has been shown to be used for mental function, to increase energy in the body, to help with concentration, to allow increased exercise ability, and to improve the bodies functioning of the heart and lungs.

A glutathione deficiency can result in a lack of coordination, mental disorders, tremors, and difficulty maintaining balance.

What Glutathione is and does:

1. Glutathione is the master antioxidant that is produced by every cell.

2. It is the body’s most effective detoxifier. It binds to the undesirable toxins, pollutants, and cancer-causing chemicals, etc. and excretes them through the urine or gut.

Glutathione is manufactured by every cell in the body and is one of the most important healing and cleansing agents.

4. It helps regulate the cell’s vital functions, such as the making of DNA in new cells and repair of DNA.

5. It contributes to the production of red blood cells.

6. It helps in wound healing.

8. It inhibits harmful viruses and bacteria in the gastrointestinal tract.

9. It increases one’s aerobic exercise capacity by up to 13%.

10. Glutathione has been noted by the medical establishment as important and has produced 86,000 articles which can be found on the National Institute of Health website. Just search for Glutathione at www.PubMed.gov

It is believed that the pharmaceutical companies have unsuccessful spent over $500 million in trying to create a drug to increase Glutathione inside the cell.

WHAT FOODS ARE HIGH IN GLUTATHIONE?

Glutathione must be produced within the cell itself. Oral glutathione in pill form is not absorbed and will be eliminated by the liver before reaching the blood stream. Injectable glutathione is degraded by the time it gets to the cell and much of it cannot pass the cell membrane.

HOW CAN A PERSON INCREASE THEIR GLUTATHIONE LEVEL?

In addition to being able to get glutathione in foods (as listed above), the only way that a person could increase glutathione is through a glutathione precursor’s – the three amino acids, cysteine, glycine and glutamate .

Can I get Glutathione as a supplement?

Taking oral glutathione hasn’t worked in the past. Glutathione taken orally has been ineffective due to the stomach acid breaking the protein down. The body sees glutathione the same way it sees other proteins like meat. It breaks it down.

Nonetheless, many glutathione supplements are being sold since the many benefits of glutathione are fairly well known.