Is it Because We Eat Better? 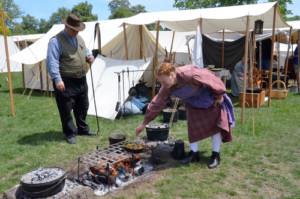 Recently, I was visiting some historical locations of the War Between the States. I sat on a bench that had been on a porch since the war. It was lower than usual. I got up thinking how people were much smaller 150 years ago.

I then remembered when I was 13 years old; I was already taller than my mom, and I remember her telling me that people are getting taller because they eat better. Now trying to accept that as a fact, a reason why, has become hard to do. I know that the food is not better now, nor has it been better anytime during the mid-1900s. You just have to take a look at any label in a regular supermarket (and even in health food stores in some cases) to see how many unusual ingredients are in the food.

There’s lots of information about what’s in processed food and what it does. There is even a lot of information on how the type of food a cow eats will affect our health. Have you ever tasted the difference in the meat of grass fed animals? I’ve seen people standing in line, waiting a half hour to get a hamburger made from grass fed cows because it tastes so much better. Do you think it might also be healthier?

Non-grass fed beef not only comes from cattle fed all sorts of by-products instead of grass but they are also treated with hormones and antibiotics. Why? Because the cheaper feed – grain, soy, etc. are not the regular food for cows and it affects their stomach and thus the antibiotics. And the hormones make an animal grew faster and bigger. Both are more profitable.

Xenoestrogen: Xeno means foreign. Xenoestogens are found in many food sources. They can enter the food we eat from sources including not only an animal that was fed hormones, but the pesticides used to grow vegetables, pharmaceuticals, plastics, etc. etc. These foreign hormones, unlike estrogen produced by the body, don’t quickly flush out of the body but they remain circulating or stored in the body.

We have hormones in our food that they didn’t have in the 1800s. In the 1800s they were more likely to take natural plant medicine (herbs, plant based therapy, flower essences, etc.) or homeopathic remedies than pharmaceuticals. Although the development of petrochemicals started the pharmaceutical companies in 1880, it wasn’t until the beginning of the 20th century with the introduction of insulin and penicillin in the 1920s and 30s that the development of the modern pharmaceutical industry really began.

So why are people taller 150 years later? These food additives just might have something to do with why so many people are larger in height and in weight.