Opioid Use and Abuse 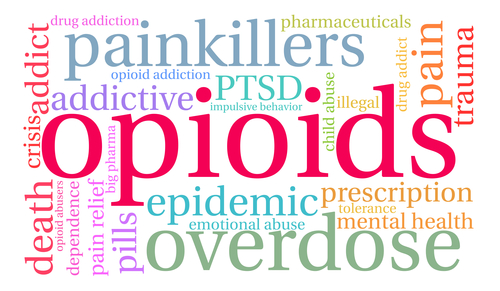 Opioids are drugs that were created to work on the nervous system to relieve pain. They were designed for short term use. Continued use of only a few weeks can lead to physical dependence and withdrawal symptoms when trying to stop.

In the late 1990s, the pharmaceutical companies who created these drugs reassured the medical community that patients would not become addicted to prescription opioid pain relievers, and the medical doctors began to prescribe them at greater rates.

Opioids are genetically referred to as pain killers. These drugs contain opium and opium-like substances and are used to relieve pain.

Some of the well-known brand names and street names:

Some of the short-term effects of opioids and other morphine derivatives include: drowsiness, slowed breathing, confusion, reduced heart rate and constipation.

How does opioid use hurt the body?

Lungs: Opioids interfere with the normal function of the lungs and can result in a greater risk of pneumonia.

Stomach and intestines: Opiates are very well known for causing constipation, even at their normal dosage. The slowdown in bowel function results in symptoms like nausea, bloating, vomiting, and abdominal distention.

Liver: Every drug is broken down and processed by the liver. The liver is therefore heavily stressed by prescription painkiller abuse and can store toxins from the breakdown process.

Kidneys: Chronic use of painkillers for years can have a directly damaging effect on the kidneys, leading to the need for dialysis or transplant. It is not the opiate in the painkillers that disables the kidneys, but the secondary analgesics such as acetaminophen.

Another side effect is tolerance to the drug, meaning that users must increase their doses to achieve the same results, both as a pain reliever or using it for a high.

Continued use of opioids can result in physical dependence and addiction. With all drugs the body must adapt to the presence of the drug. Drugs unbalance the body’s systems but the system balances itself somehow. Withdrawal symptoms occur if the use of the drug is reduced or stopped. You basically unbalance the system again but by taking away the thing that the body was balancing against.

The Truth About Drugs

Drugs are essentially poisons. The amount taken determines the effect. A small amount is a stimulant (speeds you up), a greater amount acts as a sedative (slows you down) An even larger amount poisons and can kill. (This is true of any drug. Only the amount needed for the effect differs).

But many drugs have another liability. Drugs also directly affect the mind. They can distort the users perception of what is happening around him or her. Their reactions can thus seem inappropriate and even destructive.

What can you do?

There are many programs, too numerous to mention here, who are promising they can get you off of these drugs. Be sure, if you wish to use a program, you fully find out what their methods are and agree with their procedures.

There are some programs that give you another drug that is easier to get off of, but that really is just taking a drug to cover up the symptoms of withdrawal. You then have to get off the second drug. Even it is easier to get off, it is not very healthy to put yet another drug into the body. You have to remember that drugs deplete the body of vitamins and minerals, etc. and the body is already under siege. You don’t want to make things worse.

As with all addictive drugs, you don’t want to throw the body into a spin. You want to slowly withdraw from the drug by working with a medical doctor who can prescribe smaller and smaller amounts. This should be very small amounts, slowly withdrawing in small percentages is best.

To handle any withdrawal symptoms, which are minimized with a slow withdrawal, you can take the nutritional support that will alleviate the symptoms while you get off of the drug. There are many nutrients that will help with anxiety, muscle aches, etc.

Since opioid addiction is now called the opioid epidemic, there are many solutions around to look at and consider, but an important step is to educate the teens, young adults and others The Truth About Drugs.