Something You’ve Never Been Told about Breakfast Cereals 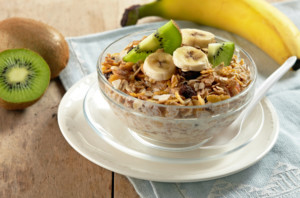 In most households you will find both parents and children sitting down to breakfast and automatically filling their bowls with some breakfast cereal.

When you go to the supermarket today you will find at least one entire row filled with boxes of cereals, all different colors, shapes and flavors.

There are cereals for kids (ones they’ve seen on TV) and “healthier” cereals designed to attract adults, claiming to have nutritional value.

But what is the truth and how are cereals made? The following was presented at Consumer Health Canada:

“Cereal makers first create a thin mud like mixture composed of water and grains. This mixture is then put into a machine called an ‘extruder’.”

“The extruder forces the grain mixture out of little holes at high temperature and pressure. Depending on the shape of the holes, the grains come out as little ‘o’ shapes, flakes, animal shapes, or shreds (as in shredded wheat), or they are puffed (as in puffed rice). Each little flake or shape is then sprayed with a coating of oil and sugar to seal off the cereal and give it crunch.”

“In his book Fighting the Food Giants, Paul Stitt* tells us that the ‘extrusion’ process used for these cereals destroys most of the nutrients in the grains. It destroys the fatty acids; it even destroys the chemical vitamins that are added at the end. The amino acids [Definition: the molecules that form proteins] are chemically altered by this process, thus diminishing and destroying their original qualities and properties.”

“This is how all the boxed cereals are made, even the ones sold in the health food stores. They are all made in the same way and mostly in the same factories. All dry cereals that come in boxes are extruded cereals [Editor’s Note: except some basic cereals such as ‘rolled’ oats or ‘steel cut’ oats].”

The rat experiments that were never published:

“Let me tell you about two studies which were not published. The first was described by Paul Stitt who wrote about an experiment conducted by a cereal company in which four sets of rats were given special diets.”

“The rats that received the whole wheat lived over a year on this diet. The rats that got nothing but water and vitamins lived about two months.”

“The animals on water alone lived about a month. But the company’s own laboratory study showed that the rats given the vitamins, water and all the puffed wheat they wanted died within two weeks — they died before the rats that got no food at all.”

“It wasn’t a matter of the rats dying of malnutrition. Autopsy revealed dysfunction of the pancreas, liver and kidneys and degeneration of the nerves of the spine.”

“Results like these suggested that there was something actually very toxic in the puffed wheat itself! Proteins are very similar to certain toxins in molecular structure, and the pressure of the puffing process may produce chemical changes, which turn a nutritious grain into a poisonous substance.”

“Another unpublished experiment was carried out in the 1960s. Researchers at Ann Arbor University were given 18 laboratory rats. They were divided into three groups: one group received corn flakes and water; a second group was given the cardboard box that the corn flakes came in and water; the control group received rat chow and water.”

“The rats in the control group remained in good health throughout the experiment. The rats eating the box became lethargic and eventually died of malnutrition. But the rats receiving the corn flakes and water died before the rats that were eating the box! (The last corn flake rat died the day the first box rat died.)”

“But before death, the corn flake rats developed bizarre behavior, threw fits, bit each other and finally went into convulsions. The startling conclusion of this study is that there was more nourishment in the box than there was in the corn flakes.”

“This experiment was actually designed as a joke, but the results were far from funny. The results were never published and similar studies have not been conducted.”

“Extruded cereals sold in the health food stores are made by the same method. It may come as a shock to you, but these whole grain extruded cereals are probably more dangerous than those sold in the supermarket, because they are higher in protein and it is the proteins in these cereals that are so denatured [Definition: made unfit to eat] by this type of processing.”

Excerpted from a presentation at the conference of Consumer Health of Canada, March, 2002, given by Sally Fallon, Nutrition Researcher

Instead of having cereal, make a really nutritious breakfast of eggs (fried, scrambled, or omelet with meat, cheese or vegetables) with bacon, sausage, hamburger patty or steak. If you feel you must have cereal to make it through the day, “rolled oats” or “steel cut oats” are still real food.

The idea that there are breakfast foods, lunch foods and dinner foods are something we learn when we are young at the dinner table and from our parents.

In fact, when you wake up in the morning your body usually tells you that it is hungry. Your body does not care whether you feed it a juicy steak and steamed broccoli or a plate of scrambled eggs. As long as it is real nourishing food, you will be on your way to improved health and vigor!