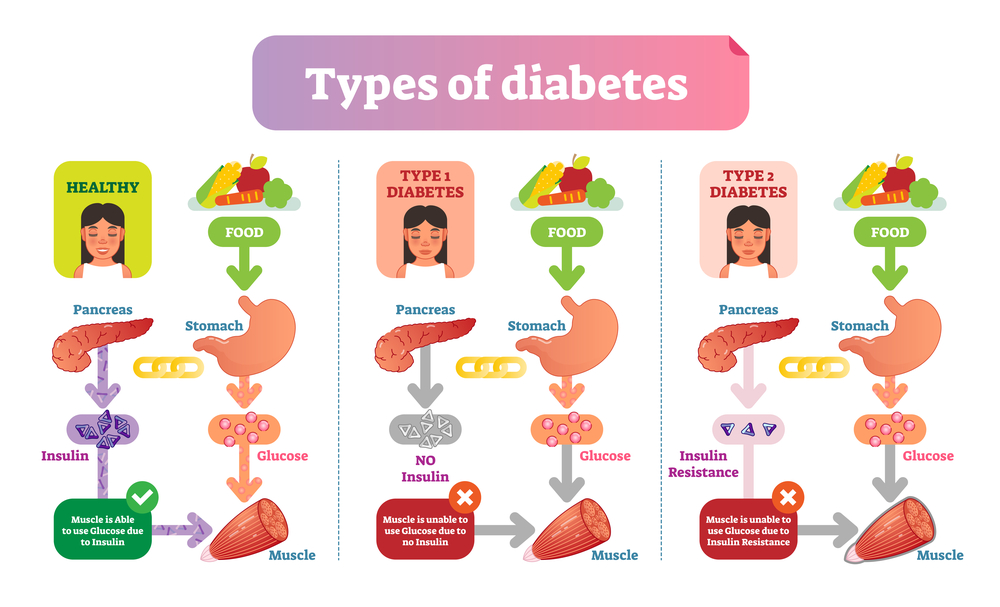 Is it possible to improve a diabetic condition? What is the cause of diabetes and what can be done about it?

Type 1 diabetes is associated with the destruction of the beta cells of the pancreas. These cells manufacture insulin. This type of diabetes occurs mostly in children and young adults. Their bodies don’t manufacture enough insulin.

Type 2 is by far the more prevalent form.

In this type of the disorder, the Type 2 diabetes, the pancreas does produce insulin, but the insulin produced is ineffective. With the constant inflow of high carbohydrate and sugary foods, the body produces more insulin. When this continues day after day and year after year, the cells become insulin resistive – the doors to the cells which are called cell receptors close up. The body produces more insulin to get the glucose into the cells. The body is then producing too much insulin, the cells don’t respond to the insulin anymore, so more and more insulin is put into the blood stream which in turn creates more insulin resistance.

It appears that there are many reasons why diabetes develops, but the main reason is poor food selection; a diet high in refined carbohydrates and sugars. Your typical American diet.

What can you do about it?

Diabetes is now ranked as the fifth largest killer in the United States, but this does not take into consideration many of the heart attacks, strokes and deaths by other complications brought about by too much sugar in the blood.

The discovery of insulin in the 1920s was thought to be a miracle. It has saved countless lives and has extended the life spans of childhood diabetics from months to decades. The problem with insulin is that it is prescribed universally, not just to those with true insulin deficiencies.

Diabetes is a disease that if you don’t take effective action against, it simply gets worse.

For more information about Diabetes

There is also a great Vitamin C which is a missing ingredient for Diabetics. See Vitamin C here.

There are two types of diabetes:

Diabetes Insipidus: This is a rare metabolic disorder caused either by a deficiency of the pituitary hormone vasopressin or by the inability of the kidneys to respond properly to this hormone. Failure to produce adequate amounts of vasopressin is usually the result of damage to the pituitary gland.

Diabetes mellitus:(mellitus means “honeyed” in Latin) This results from a defect in the production of insulin by the pancreas. Without insulin, the body cannot use the glucose (blood sugar). As a result, the level of glucose circulating in the blood is high and the level of glucose absorbed by the body tissues is low. The glucose can not get inside of the cells where it is needed.

More information about the Symptoms of Diabetes

Symptoms of Type I diabetes include irritability, frequent urination, abnormal thirst, weight loss despite a normal (or even increased) intake of food. In children, frequent bed wetting – especially by a child who did not previously wet the bed – is another common sign.

People with Type I diabetes are subject to episodes in which blood glucose levels are very high (hyperglycemia) and very low (hypoglycemia). Either of these conditions can lead to a serious medical emergency.

Episodes of low blood sugar, which strike suddenly, can be caused by a missed meal, or a reaction to too much insulin. The initial signs of hypoglycemia are hunger, dizziness, sweating, confusion, palpitations, and numbness or tingling of the lips. If not treated the individual may go on to experience double vision, trembling, and disorientation; may act strangely; and may eventually lapse into a coma.

In contrast, high blood sugar can trigger an episode over a period of several hours or even days. This risk is greatest during illness, when insulin requirements rise. The blood sugar can creep up, ultimately resulting in coma, a reaction also known as diabetic ketonacidosis. Once of the warning signs of developing high blood sugar is the inability to keep down fluids. Possible long-term complications include stroke, blindness, heart disease, kidney failure, gangrene and nerve damage.

The second category of diabetes mellitus Type II, often referred to as maturity-onset diabetes, is most likely to occur in people with a family history of diabetes. (But, then again, eating habits run in the family)

Symptoms include blurred vision, itching, excessive thirst, frequent urination of large amounts of fluid, systemic hyperacidity, rapid weight loss, severe itching, fatigue and marked weakness, drowsiness, skin infections, slow wound healing, and tingling or numbness of the feet. The onset of type II diabetes typically occurs during adulthood and is linked to a poor diet. Other signs that may be associated with diabetes include lingering flu like symptoms, loss of hair on the legs, increased facial hair, and small yellow bumps know as zanthomas anywhere on the body.

Important Note: If you are diagnosed as having diabetes your doctor will give you instructions on what to do if hypoglycemia occurs. If symptoms of hyperglycemia develop, go to the emergency room of the nearest hospital. This is a potentially dangerous situation and intravenous administration of proper fluids, electrolyte, and insulin may be required.