Above Sea Coral vs. Marine Coral 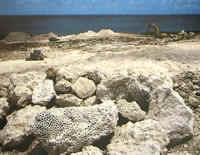 Thousands of years ago this coral was a thriving coral reef. Geologically, this coral was pushed up above sea level, free from the ocean pollution of the industrial era.

This harvesting process involves removal of the protective layer of soil that accumulated over the eons and collecting the ancient coral. The environmental consequences are similar to any small land based mining operation.

After the coral is collected it is ground into a 2 to 10 micron size powder (smaller than a red blood cell). After grinding the coral is purified in a vacuum ozone chamber and then packaged for distribution.

Above sea harvesting respects the fragile state of the coral reefs and ocean environment. Unfortunately, other companies do take dead coral rubble from the ocean.

Dredging the ocean floor devastates the ocean ecology and is detrimental to the living reefs. Coral larvae propagate in the dead coral debris and any disturbance directly affects the life of the living reef The turbidity from a dredging ship will settle on the reef and kill it.

The turbidity from a dredging ship will settle on the reef and kill it.

“Clearing large areas of coral rubble would certainly impact reef ecosystems, not only because coral larvae settle on rubble (which is well-documented), but also because there are countless organisms that inhabit spaces within corals and rubble. Removing coral rubble from areas where the underlying sediment is unsuitable for larval settlement would certainly inhibit new corals from attaching and growing. I can’t conceive that this practice would not negatively affect the long-term integrity of most coral reef ecosystems. There are other complexities such as the removal of coral rubble that would change micro-flow patterns near the underlying substrate, in turn affecting the settling ability of coral larvae.” – Dr. Michael Dowgiallo, Ph.D., Coral Reef Program Coordinator, National Oceanic and Atmospheric Administration

“I would have an extremely hard time believing anyone who suggests that this activity would be benign. Dead corals may act as a substrate for new colonizers, so vacuuming up even dead corals or coral fragments might hinder the ability of refs to recover in the future. Even if dredging/vacuuming is occurring where there are no (or few) corals, there are certainly other organisms being directly effected, such as sea whips and anemones, many of which also provide structure to habitats and thus provide essential ecosystem functions (such as hiding places for juvenile fish and substrate for various life stages of invertebrates.” – John Clark Field, PHD Candidate, School of Aquatic and Fisheries Sciences, University of Washington

“This activity can hard the corals and the organisms that live in and on them in two ways. First, the dredging and vacuuming activity loosens and stirs up large amounts of sediment in the water. This sediment smothers and kills corals and other organisms in the ecosystem. An additional adverse effect of stirring up the sediment with the dredging and vacuuming activities is that the turbidity of the water prevents light from reaching the corals, and the corals need light in order to survive and grow. Secondly, reefs are formed (and grow) by a process of bioaccretion (cementing together) of carbonate particles that have been removed from the living coral by bioerosion. If all the sediment that has accumulated around a reef (especially that which has already begun to solidify and hence does not risk smothering the reef) is scraped away, the reef loses its capability to grow and keep up with sea-level rise. Failure to grow and keep pace with sea-level rise would mean the demise of the reef because the corals need light and thus must be near the surface in order to live. – Dr. Marjorie L. Reaka-Kudia, PhD, Professor, Department of Biology, The University of Maryland

“Bottom trawling, or dragging nets along the ocean floor to catch fish, is so devastating to the marine environment that the practice should be banned from fragile areas, according to a U.S. National Academy of Sciences report released yesterday. The report, which was requested by the National Marine Fisheries Service, recommended protecting areas along the Pacific Coast, the North Atlantic, the Gulf Coast, and the Alaskan Coast, reducing trawling elsewhere, and requiring modifications to equipment to minimize damage. The recommendations were welcomed by environmentalists, some of whom compare bottom trawling to clear-cutting. A bipartisan group of Congress members plans to introduce legislation today to restrict bottom trawling.” National Academy of Sciences reporting on Trawling, Los Angeles Times, Kenneth R. Weiss

Back to Coral Calcium