Are you being sold “snake oil”?

What is snake oil?

We all seem to know what “snake oil” means. The term “snake oil salesman” conjures up images of a dishonest salesman trying to exploit an unsuspecting public by selling it fake cures and claiming it will cure all ills. Using this term conveniently devaluates a product when the phrase “snake oil” is used to describe it.

I was watching a documentary about medical myths. Snake oil got my attention. 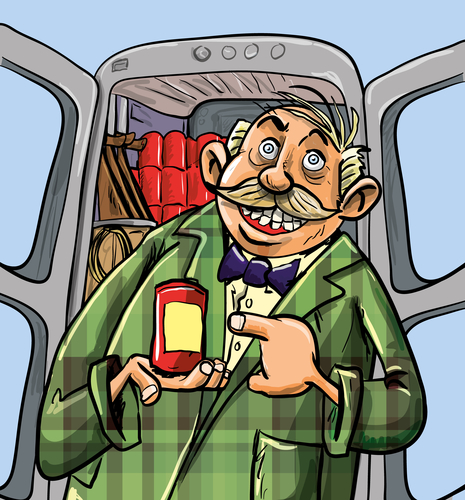 Cartoon Sale man selling his wares outside his car

Snake oil is actually Chinese medicine. It was brought to American along with other Chinese remedies by the Chinese immigrant workers on the Trans-Continental Railroad built in the 1860s. They had a huge back-breaking job.

They used snake oil to help with their sore muscles. Made from the oil of the Chinese water snake, which is rich in the omega-3 fatty acids that helps reduce inflammation, it was effective, The workers would rub the oil on their muscles and joints after a long hard day at work. Apparently they began sharing the oil with American workers who marveled at the effects.

As word of the healing powers of the snake oil grew, it became popular.

In the early 1900s, there was a salesman, Clark Stanley, aka the “Rattlesnake King”, who was selling “Snake Oil Liniment”. If his oil was made from rattlesnake oil it would have been far less effective than the Chinese snake oil.

In 1906 there was a Pure Food & Drug Act passed which sought to clamp down on the sale of patent medicines. A shipment of Stanley’s Snake Oil was seized and examined.

It was tested and found not to include any snake oil. It contained mineral oil, a fatty oil believed to be beef fat, red pepper, and turpentine. It didn’t contain a drop of “snake oil”. Consumers found they had been defrauded. He was fined for “misbranding” his product by “falsely and fraudulently represent[ing] it as a remedy for all pain.”

So the press had a field day and “snake oil” was now used to describe anything that was believed to be deceptively telling people it would cure their ills when it wouldn’t.

Why do I ask if you are being sold snake oil?

The body needs forty nutrients to be able to create and sustain health. If you don’t have any one of these nutrients, it will result in 100s of chemical reactions needed by the body not happening and thus creating a whole range of problems. Most people take vitamins and minerals to make sure they get what they need when they know their diet isn’t sufficient. I know I do.

But what about your supplements?

Are you taking fake nutritional supplements? Are you taking food-based vitamins that actually use food? Natural vitamins are derived directly from plant material containing the vitamin. It is not produced in a test tube.

Are you taking synthetic versions of vitamins which contain chemical compounds that were not meant for human consumption and do not occur in nature? Synthetic vitamins lack co-factors associated with naturally occurring vitamins.

Are we sold “snake oil” today?

Are you being sold laboratory created vitamins made of petrochemicals that don’t provide the body with what it needs? Are we being told it will cure our ills?

Laboratory-made supplements – vitamins, minerals, etc. etc. fit the description of “snake oil”. It claims to give you what your body needs but doesn’t contain what the body needs.

What happens when you put an artificial vitamins into the body? Does your body recognize it and use it? Will it actually gum up the works when the body tries to use it in its metabolic functions?

Find out more about Synthetic Vitamins

Actually, when I think about it fake food is in itself another “snake oil” as they promise to give your body the nutrition it needs but fill the box with chemicals and additives not needed by the body.

Read also Are your vitamins doing you any good?

and What to Expect When Taking All Natural Vitamins

There are lots of whole food vitamins available, but you have to do your homework and make sure they are natural, whole food and food-based.

These are some that we know are food-based and used by the body to build health.

Better Vitamins – some good ones we recommend