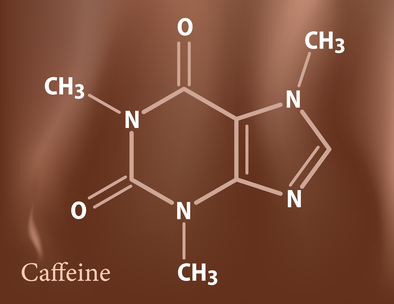 Caffeine can be found in coffee, tea, cola, cocoa, chocolate, energy drinks, and many other sources. It is even in some medications.

What are the problems?

Though caffeinated beverages do contain water, it causes the body to excrete more water than it actually takes in. The result is the body has less fluid then it had to begin with, which over time, can lead to a variety of health problems including dry skin, constipation, bladder infections, etc. It can also lead to washing key nutrients out of the body. Water is very important to your health. See article Our Need for Water.

Caffeine stimulates and weakens the adrenal glands and liver and also irritates the gallbladder. It increases cortisol (A hormone released by the adrenal gland when a person is under stress) which can put fat into and around the abdominal organs.

Caffeine intake results in increased nerve firing in the brain. The pituitary gland, located at the bottom of the brain, sees all of the activity and thinks some sort of emergency must be occurring, so it releases hormones that tell the adrenal glands to produce adrenaline. Adrenaline is the “fight or flight” hormone. It’s function is to tell the body when there is an emergency situation, and it has a number of effects on your body including:

This explains why, after consuming a big cup of coffee, your hands can get cold, your muscles can tense up, you feel excited and you can feel your heart beat increasing.

We can see why these reactions created by adrenaline in a dangerous situation would be beneficial, but it is not good for the body as a normal operating condition.

Caffeine leeches calcium from the body. It creates acidity in the body (see Body Acid article)

Keeping awake and the effects on sleep

Caffeine has been known to be the drug of choice in keeping alert when you are short on sleep.

How does it affect wakefulness and sleep?

An organic compound, adenosine, when secreted reflects brain cell activity. Rising concentrations of this chemical may be how the brain gauges that it has been burning up its energy reserves and needs to shut down for a while or go to sleep.

Adenosine levels in the brain rise during wakefulness and decline during sleep slowing down nerve cell activity. In the brain, adenosine binding also causes blood vessels to dilate (presumably to let more oxygen in during sleep).

To a nerve cell, caffeine looks like adenosine. Caffeine therefore binds to the adenosine receptor in the brain. However, it doesn’t slow down the cell’s activity like adenosine would.

So the cell cannot “see” adenosine anymore because caffeine is taking up all the receptors adenosine binds to. So instead of slowing down because of the adenosine level, the cells speed up.

You can see that caffeine also causes the brain’s blood vessels to constrict, because it blocks adenosine’s ability to open them up. This effect is why some headache medicines like Anacin contain caffeine – if you have a vascular headache, the caffeine will close down the blood vessels and relieve it.

Adenosine reception is important to sleep, and especially to deep sleep. The half-life (of how long the caffeine stays in your body) is about 6 hours. That means that if you consume a big cup of coffee with 200 mg of caffeine in it at 3:00 PM, then by 9:00 PM about 100 mg of that caffeine is still in your system. You may be able to fall asleep, but your body probably will miss out on the benefits of deep sleep. That deficit adds up fast. The next day you feel worse, so you need caffeine as soon as you get out of bed. The cycle continues day after day.

Why caffeine is pleasant?

Caffeine increases dopamine levels in the same way that amphetamines do. Dopamine is a neurotransmitter that, in certain parts of the brain, activates the “pleasure center.” Obviously caffeine’s effect is much lower than amphetamines, but it is the same mechanism. It is suspected that the dopamine connection contributes to caffeine “addiction.”

What caffeine does for you?

So you can see why your body might like caffeine in the short term, especially if you are low on sleep and need to remain active. Caffeine blocks adenosine reception so you feel alert. It injects adrenaline into the system to give you a boost. And it manipulates dopamine production to make you feel good.

Depletes the body of such needed nutrients as Vitamin B1, inositol, Biotin, potassium, zinc, and can also inhibit calcium and iron assimilation. This can lead to things such as:

The problem with caffeine is the longer-term effects, which tend to spiral downward. For example, once the caffeine wears off you face fatigue and depression. So what are you going to do? You take more caffeine to get the adrenaline going again. As you might imagine, having your body in a state of emergency all day long isn’t very healthy, and it also makes you jumpy and irritable.

Caffeine is a drug. It can cause dependency and adverse reactions that most people are not aware of and can create withdrawal symptoms when the intake of caffeine is reduced. Drinking one or two cups of coffee per day might be okay, but drinking more than three cups per day can create these adverse effects.

This is why 90% of Americans consume caffeine every day. Once you get in the cycle, you have to keep taking the drug. Even worse, if you try to stop taking caffeine, you get very tired and depressed and you can get a terrible, splitting headache as blood vessels in the brain dilate. These negative effects force you to run back to caffeine even if you want to stop.

It has been said that the reason so many sodas and colas contain added caffeine is to get you hooked. In the same way that addiction to nicotine makes cigarettes such a great consumer product for the companies that produce cigarettes. The added caffeine in the drinks causes addiction that boosts sales. Can you see a pattern here?

Children who consume large amounts of caffeinated soft drinks may suffer from withdrawal when their caffeine intake is reduced. Symptoms of caffeine withdrawal in kids include declining attention and declining reaction time when performing tasks.

Getting off of caffeine

Appetite suppressants contain caffeine and there is caffeine in pill form to stay awake while driving.

Green tea is another beneficial way to transition because, despite having some caffeine, it has an anti-caffeine effect.

Herbal stimulants, which do not have caffeine, can have this same ability to stimulate but don’t burn out your glands.

Drink plenty of water!! How much, read the article Our Need for Water

Suffering from caffeine withdrawal and tired?

We recommend the RHP Real Energy Formula. It has natural ingredients that help you create energy. It’s an energy drink based on good nutrition. Taken in the morning it can replace the need for that first cup of coffee.

“I want to thank you guys for your help with everything for my health. However, I want to extend an extra Thank You for this energy drink. I have found it to be a life saver for a number of reasons. Not only have I stopped drinking my triple shot of coffee which cost me at least fifty dollars a month, but I do not have the jitters the coffee causes now.” Darrell P. in Washington