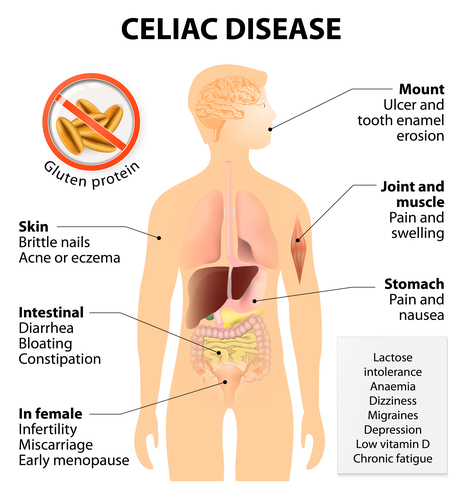 A disorder resulting from an abnormal reaction by the body’s immune system to gluten, It is an immune reaction, creating an allergic reaction to this protein.

Gluten comes, not surprisingly, from the Latin word for glue, and cookbooks define it as the protein-based substance that makes dough resilient and stretchy. If you’re making bread, you want gluten in the dough, so that when it’s baking the walls of the little air pockets formed by yeast expand but don’t burst open.

But if you’re making cookies or a piecrust, you want to keep the gluten content of the dough and batter low. Otherwise, your results will be tough and gummy.

In the context of celiac disease, gluten refers to the protein of grains capable of provoking an autoimmune response. Other grains also contain protein, but wheat, barley, rye, and spelt contain varieties that aren’t broken down by digestive enzymes. In wheat, the difficult-to-digest protein is gliadin; in rye, it’s secalin; and in barley, hordein.

What does this mean for the person who is intolerant?

These proteins don’t bother most people, but in people with gluten intolerance, when they get absorbed into the walls of the small intestine, the immune system misreads the situation, views them as intruders, and unleashes a furious inflammatory response that damages tissue.

The inside of a normal, healthy small intestine is has millions of fingerlike projections called villi that produce digestive enzymes and absorb nutrients. The misguided immune response triggered by the gluten proteins sometimes attacks these villi, so they lose their slender shape and become short and stubby, even flat.

When that happens, the villi produce fewer digestive enzymes and results in poor absorption of nutrients from food. Symptoms may include diarrhea, anemia, and weight loss.

A remedy that is obvious – eat a gluten-free diet. That is the first step. Give your body a break and get relief.

How Common is Celiac Disease

Celiac disease was once considered extremely rare, affecting no more than one person in 5,000. However, in the past half-century or so, clinicians have recognized that it now affects about at least one percent of the population. Current estimates are that approximately one person in 130 has celiac disease. One study found that more than 1 percent of the population worldwide is affected (Clinical Gastroenterology and Hepatology, June 2018)

Recent studies show, that greater exposure to environmental chemicals might be contributing. A new study conducted by investigators from NYU Langone Health found that youngsters exposed to high levels of pesticides and related compounds called DDEs are twice as likely to be diagnosed with celiac disease than those with low levels (Environmental Research, online May 11, 2020).

See more in this article Is Celiac More Common in People exposed to Pollutants?

Some people with celiac disease may not have symptoms, but internal malabsorption and malnutrition can ruin health over many years. Both celiac disease and gluten intolerance can be made worse by emotional and physical stress including infection, surgery, pregnancy and childbirth. Every individual with some level of gluten intolerance or allergy may experience different variations of symptoms. It is thus a challenge for medical practitioners to diagnose. A nutritionist can test you for these allergies.

Sometimes it is not diagnosed because the doctor is only looking for the gastro-intestinal symptoms.

Undiagnosed for long periods of time, food intolerances have been found to contribute to diabetes, bowel cancer, anemia and osteoporosis.

In people with symptoms, judging whether there’s a favorable response to a gluten-free diet isn’t difficult: the turnaround from illness to health can be quite dramatic.

Neuropathy, or peripheral neuropathy, describes a range of disorders characterized by nerve damage to one or more nerves outside of the brain and spinal cord. Often the cause of the neuropathy is unknown, though autoimmune diseases and vitamin deficiencies are some of the potential causes, according to the Mayo Clinic. Gluten neuropathy is when the autoimmune response is the root cause of the nerve damage.

A study published in Muscle & Nerve journal in December 2006 found that participants with neuropathy who followed a gluten-free diet showed significant improvement in symptoms after one year. The control group reported worsening of symptoms.

Gluten Free Food, Is it Safe?