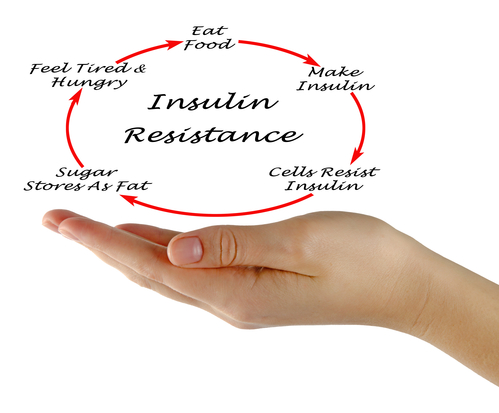 The human body developed on this planet over the past 2 million years. During all but the last 8,000 of those years (and 8,000 years when you are talking of an evolutionary time frame is but the blink of an eye), the human body evolved eating meat, fat, and high fiber vegetables, with some roots and tubers.

Eight thousand years ago the “agricultural revolution” took place, with man learning how to domesticate grain. Virtually overnight, man became dependent upon carbohydrates as the main source of food. Archeologists point to that exact time period that the average height of man drops by two inches and all of the degenerative diseases we have today became prevalent in the society of that time.

With today’s accepted high carbohydrate diet, it is projected that by the year 2025 there will be over 300 million diabetics planet-wide. It is just not the diet our bodies evolved with.

What is insulin resistance?

If this happened every once in a while it would not be a problem. But as diets today are so high in carbohydrates, people have a constant high level of sugar pouring into their bloodstream year after year.

This requires their body to continuously produce high levels of insulin to keep that sugar level down. (Insulin’s job is to push sugar out of the bloodstream into the cells where it is used for energy.)

The result is type 2 diabetes. Type 2 diabetes is actually an extreme case of insulin resistance, or “pre-diabetes”.

The biggest indicator of Insulin Resistance is that you are hungry after a meal or you want something sweet after a meal. This indicates that nutrition is not getting into the cells to create energy and thus you still feel hungry.

Unexplained weight gain: Excess (over-produced) insulin is not excreted – it is stored as fat in the body. This is one reason why people with insulin resistance gain weight more easily than those who are not insulin resistant. The excess weight is carried around the abdomen.

Excess facial and body hair, especially on girls and women, can be another sign of insulin resistance.

High blood sugar (blood glucose), but they may also have episodes of low blood sugar or even normal blood sugar levels; High blood pressure, sleep problems, mood swings, fatigue, brain fogginess and inability to focus, sleepiness, especially after meals and increased hunger can all be symptoms.

Depression due to unbalanced metabolism and hormones caused by the insulin resistance (insulin is a hormone, too much will unbalance the other hormones).

Women and girls who have irregular or absent periods should be checked for insulin resistance (again the unbalanced hormones).

The Best Test for Insulin Resistance – (insulin or fat storing hormone) both an educational video and an article.

How to Stop Pre-Diabetes (Insulin Resistance) Going into Diabetes

The best diet for insulin resistance follows the below guidelines:

Avoid simple sugars – These cause the pancreas to overproduce insulin. They also lack B vitamins and other essential nutrients which are needed to metabolize sugar into energy. Simple sugars come in a variety of forms called: sugar, fructose, glucose, corn sweeteners, corn syrup, fruit sugar, table sugar, and brown sugar. They are found in alcoholic beverages and are hiding in many canned, packaged and frozen foods.

Insulin resistance and artificial sweeteners? – use stevia, it is an herb.

Add fiber-rich foods – sluggish digestion or constipation can benefit. It can help slow down the absorption of glucose into the intestinal capillaries. Slower absorption allows a more gradual release of insulin and faster normalization of blood sugar levels after meals.

Avoid caffeine and nicotine – these over stimulate the adrenal glands. When these and other stressors and a generally poor diet are combined, the adrenals can enter into a state of emergency. They become depleted of important vitamins such as B complex and C.

Diet A low carbohydrate diet and sustained regular exercise will help with lowering the levels of blood sugar and thus insulin.

Camel Milk – It has been shown to improve insulin sensitivity in people using it. See information and Research

Healthy fats in the diet is excellent as it doesn’t stimulate insulin production.

Or eat low carb for 2 weeks and see if you feel better.

For added nuttition mix Metabolic Boost in Camel Milk. Read why at Camel Milk has beneficial effects on Insulin Resistence