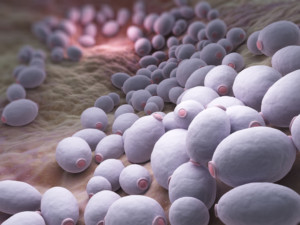 Candida albicans is a type of parasitic yeast-like fungus that inhabits the intestines, genital tract, mouth, esophagus, and throat. It is the disorder caused by an overgrowth of the yeast Candida albicans within the body.

Normally this type of fungus lives in a healthy balance with the other bacteria and yeasts in the body. It is important to note that a certain level of candida yeast is a useful, natural part of the human system, helping to balance normal body function. However, certain conditions can cause it to multiply and become an overgrowth while weakening the immune system. The fungus can travel through the bloodstream to many parts of the body.

Candida overgrowth is one of those difficult to diagnose diseases because it has many symptoms that indicate other ailments.

How does Candida create problems?

This results in a variety of conditions at different levels of severity and discomfort, experienced by millions each year. Candidiasis occurs in both males and females, although it is more prevalent among females.

Since candida can cause multiple systemic illnesses, a whole gamut of symptoms, ranging from the general to those affecting specific areas is possible.

Symptoms often worsen in damp and/or moldy places, and after consumption of foods containing sugar, a high amount of carbohydrates (Carbs are actually a lot of glucose molecules linked together) and/or yeast or fungus in the food.

Because of its many and varied symptoms, this disorder is often misdiagnosed. Although it may affect both men and women, however, it is rarely transmitted sexually.

Very often, allergies to foods are present in people with candida infections.

In the respiratory tract, problems caused by candida range from chronic, post-nasal drip and coughs to sore throats, colds and asthma.

The skin can be affected too, with eczema, itching, rashes, acne, and fungal infections.

A variety of gynecological symptoms are possible with candida, the most common one being a vaginal yeast infection characterized by itching, redness, irritation, and a cheesy, white discharge.

Candida sometimes can be thought to be chronic fatigue syndrome.

Candida overgrowth is the result of living habits, dietary, and environmental influences that have led to a reduced level of biological functioning. Yeast and other potentially harmful micro-organisms would have no place to multiply out of control and mutate into pathogenic forms unless the proper conditions for their mutation and proliferation existed.

When the concentration of healthy bacterial species is greatly diminished, the candida yeast organisms begin a process of mutation into harmful fungal forms. In their mutated forms, these fungal rhizoids develop elongated root-like structures capable of penetrating the intestinal lining, entering the circulating blood and colonizing tissues throughout the body.

Such fungal organisms produce powerful toxins, posing a severe challenge to the system’s detoxification pathways and cause many of the candida /dysbiosis sufferer’s symptoms.

Damage to the intestine’s lining makes it more permeable to substances that were previously incapable of gaining entrance into the bloodstream via the intestinal lining. Because of this phenomenon (leaky gut syndrome) toxins and large food molecules that would normally have no way of getting into the circulating blood are absorbed and create an enormous burden on the immune system that now has to neutralize, destroy and eliminate them. This produces many of the “allergic” and inflammatory symptoms that so often impact individuals with candida overgrowth.

All persons on long term antibiotics and chemotherapy are at high risk for severe cases of candidiasis.

Taking antibiotics also can cause a deficiency of vitamin K, which is manufactured by the “good bacteria” in the intestines. Eating plenty of leafy greens, alfalfa, strawberries, and yogurt can restore the vitamin K balance. (For Vitamin K Supplement)

Allergy testing is advised for anyone with symptoms of candida infections.

Candidiasis may be related to hypoglycemia.

People on psychiatric drugs have an increased chance of developing an overgrowth of candida.

Rectifying immediate and local symptoms are relatively easy. There are many nonprescription corrective measures including natural remedies. However, treating local infections does not address the root of the problem, and the overall condition really should be treated, so that yeast-related maladies don’t continue to occur. Balancing the system is needed.

A person’s approach to food is important as it can either inhibit or accelerate yeast-related problems.

In using dietary strategies as a treatment for candida overgrowth, a restricted diet should be followed for several weeks. It should be low in carbohydrates. (Carbs are really just glucose molecules hooked together, that breaks down into sugar).

This diet can be followed for an indeterminate amount of time, and foods can also be added back eventually. This should be done in a gradual, one-at-a-time manner, to determine a specific food’s effect. If symptoms recur after a particular food is reintroduced, that food should be avoided.

Of course, a more direct way would be to have a nutritionist test you for food allergies.

The main thing to remember as you follow an anti-candida diet is to exclude sugar. The idea is to guard against the continued growth of yeast and to fortify the immune system, and since sugar is a main food source for yeast, and does not benefit the immune system, it has to be eliminated. Don’t just ban granulated sugar, be on guard against honey, corn and maple syrup, fruit, maltose, artificial sweeteners, fructose, cornstarch, sodas, and lactose (a milk sugar found in dairy products).

To prevent re-infection, replace your toothbrush every thirty days. This is a good preventative measure against both fungal and bacterial infections of the mouth.

Do not use corticosteroids (steroids) or oral contraceptives until the condition improves.

Drink a lot of water.

Drink Kefir. Builds up the good bacteria in the body and keeps the candida population down.

Use Kefir to build up good bacteria

Take some type of fiber daily. Veggies are good.