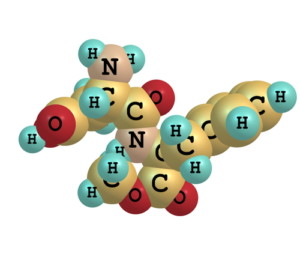 Aspartame is an artificial, non-saccharide sweetener used as a sugar substitute in some foods and beverages

Aspartame is a nutritive sweetener that provides the sweet taste of sugar at a fraction of the calories. It is a combination of the amino acids aspartic acid and phenylalanine, as the methyl ester. Aspartame, discovered almost 30 years ago, is now a widely accepted sweetener and is used by millions of Americans every day.

Reports from the Centers for Disease Control (CDC) and the Food and Drug Administration (FDA) state that the scientific evidence, including studies of a wide variety of ages and types of people, often using extremely large amounts of aspartame, supports the fact that consuming products sweetened with aspartame is no different than consuming other foods. Aspartame has been approved for use in over 90 countries.

It is also stated that individuals with a rare genetic disease called phenylketonuria (PKU), need to be aware that aspartame is a source of the protein component, phenylalanine. Those who have PKU cannot properly metabolize phenylalanine and must monitor their intake of phenylalanine from all foods, including foods containing aspartame.

In the cases of someone who has systemic lupus, it can be triggered by aspartame. The victim usually does not know that the aspartame is the culprit. The victim continues its use it, aggravating the lupus to such a degree, that sometimes it becomes life threatening. When we get people off the aspartame, those with systemic lupus usually become asymptotic.

This also applies to cases of tinnitus.

One of the side effects is nerve damage of neuropathy. See article on Neuropathy

How do you know if a product contains aspartame?

The word “aspartame” will be included in the product’s list of ingredients. If the product is sweetened exclusively with NutraSweet® brand of aspartame, it will usually have the NutraSweet® logo and swirl on the front product panel.

For a good source of Whole Food Supplements